There are many rules for playing Pinochle. The club has chosen to play by the following rules.
Rules of play for Single Deck, adapted from Hoyle, with variations adopted by the club.

Deal three (3) cards at a time. Redeal if more than one card is exposed, or if too many or too few cards are dealt to a player. Also, a new deal is required at any time during the play if there is an irregularity in two player’s hands (one having too many and another having too few cards).  When a player is short one card, or one card too many at the end of play, (when the deck is correct) he/she is in error. ( example, A player played one card to many or one card to few on a given play.) The penalty for this is the same as that for a Renege.

The player to the dealer’s left starts the bidding. Bidding starts at 15 increasing by one (1) or as reflected by meld increments. A player cannot reenter the bidding after once passing. When the first three players pass, the dealer gets the bid free of penalty, but must take at least one trick, to save their meld. If the bidder does not get one trick, the team loses the meld and no other penalty.

A bid. Is made” when the bidding teams, meld and card count are equal to or exceed the amount of the bid.

A set. Occurs when the bidders, meld and card count total is less than the bid. In this case they lose their meld, card count and the amount of the bid is also deducted from their total points.

Aces, Tens, Kings and the last trick count 1, equaling a total of 25 for the deck.

Meld points are scored as follows:

The successful bidder names trump and meld is then shown on the table for each player.(Trump cannot be changed once meld is shown). Bidder makes the first lead. Players must follow suit and play a higher card than the last card played, if possible, Trump if void in that suit, if they have trump. Player taking trick makes the next lead.

Opponents must take at least one trick to save their Meld.

RENEGE RULE: A Renege occurs when a player fails to follow suit, does not play a higher card, or does not trump when out of that suit.

Before play begins with your partner, you must agree or not, to meld bid. This method of bidding, is an attempt to inform the partner before his/her turn to bid, how many meld points are in your hand and that you prefer not to take the bid. By adding these points

To the partner’s points, the partner can determine whether he/she has a playable hand. The suggested method is, to add the meld points as shown above, And bid as follows.

Responding to a meld bid. You may pass if you do not have a playable suit or hand. If you decide that you have a playable hand, then raise the last bid by only one (1), telling partner that you want the bid and continue to bid your hand with the information you now have and will continue bidding to the highest bidding point that you feel you can, to make a contract. 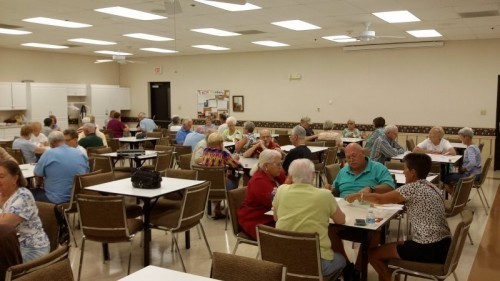